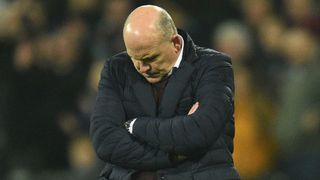 A seventh top-flight away defeat in a row, sealed by Mark Noble's late penalty, sent the Tigers to the foot of the table for the first time this season.

But it could have turned out very differently, as Dieumerci Mbokani and Andrew Robertson hit opposite uprights either side of Mark Noble heading against his own post.

"It's difficult when your team is doing ever so well, you feel for them because you want them to score the goals and get the credit," Phelan told BBC Sport.

"If we can play like that, we just need a stroke of genius or luck to get us goals."

The decisive moment arrived 14 minutes from time, when referee Lee Mason pointed to the spot when Michail Antonio went to ground under minimal contact from Tom Huddlestone.

But Phelan refused to blame the official, despite the contentious nature of the decision.

"We gave the opportunity for the referee to make a decision – and he took it," he added "The post is there to stand in the way of a goal and it did that a few times.

"You have to have a wry smile on your face or you'd be very, very depressed."

Hull have now failed to score in five consecutive league away games, but return to the KCOM Stadium on Boxing Day for the visit of Manchester City.