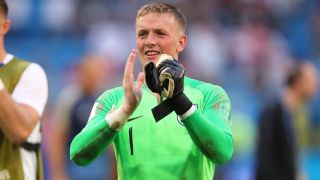 Jordan Pickford is convinced Thibaut Courtois is not much better than him after the Belgium star appeared to criticise his fellow goalkeeper following England's World Cup defeat to Roberto Martinez's side.

Belgium beat England 1-0 in their final World Cup group game to secure top spot ahead of the Three Lions, with Adnan Januzaj securing the win with a fine strike.

Pickford was criticised by many for not keeping out the shot of his former Sunderland team-mate, with some suggesting he went for it with the wrong hand.

Courtois's analysis of the goal saw him focus on Pickford's height and technique, and although the Chelsea star later insisted he was not criticising his counterpart, the Everton shot-stopper says he paid the comments little heed.

"I would not let that affect me," Pickford told reporters. "It is just a game of football. I don't let anything like that [criticism] affect me. I'm just a normal lad. It's only football.

"A lot of people think I am only young, but it is my second season in the Premier League, and I do not feel as if I am far away from guys like that [Courtois].

"I got a lot of games under my belt in the lower leagues, and I don't feel the Premier League or this [England] is that much different. In some way, non-league and League Two was the hard challenge."