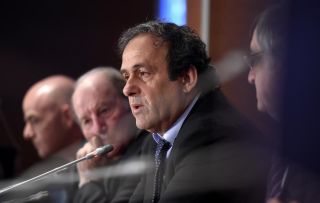 The organisation held its first match-fixing working group meeting in Nyon this week, which was attended by a host of UEFA officials, state and national football association prosecutors, police and crime prevention officials and gambling experts.

Some 13 UK-based players have been arrested in recent months on suspicion of committing "acts of bribery and money laundering relating to conduct during football matches", while four arrests were made as part of a probe in Singapore last year.

And Platini said progress had been made at the meeting after stating his frustration at seeing his warnings ignored early in his tenure.

"Since my election in 2007, I have not stopped calling for help in the fight against this danger," he said.

"UEFA and its member associations are aware of the fact that the football authorities do not have the means to deal with the problem of match-fixing themselves.

"We are doing our utmost, believe me, but our powers and prerogatives are limited, because we are not judges or prosecutors, nor are we police officers.

"It is only by working hand in hand with government authorities and law enforcement bodies that we can eradicate this scourge once and for all."

During the meeting, guests heard about UEFA's betting fraud detection system that sees more than 30,000 matches in UEFA and domestic competitions monitored each year for illegal gambling activities.

Roberto Di Martino led the Ultima Scommessa match-fixing investigation in Italy three years ago, which resulted in successful convictions, but he believes there is still plenty of work to do to eradicate the problem.

"The challenges are numerous. Match-fixing is a complex phenomenon, because it doesn't have a strict format," he said.

"There are many situations that need to be looked at and it is with initiatives of this type that we are seeking to find some common ground, especially with regards to this collaboration between judicial authorities, who investigate the crimes, and UEFA."