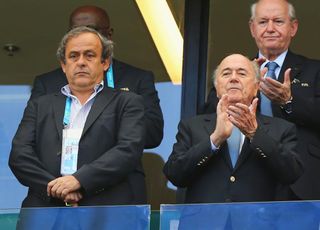 Speaking at a meeting of the 54 member associations of European football's governing body on Thursday, Platini revealed that he will instead seek a third term as president of UEFA.

The former France international has been in charge of UEFA since 2007 and has long been tipped as a potential candidate to run against Blatter, who is hoping to secure re-election and a fifth term as FIFA president at next year's ballot.

Platini has previously expressed his view that FIFA needs "a breath of fresh air" at the head of the organisation, but despite those remarks, the 59-year-old has opted not to make a push for football's top job.

"As you have seen, we are working on some very important projects at UEFA, and I still want to see them through before considering one day moving on to pastures new," Platini said.

"This is not the time, it is not my time. Not yet.

"And if the associations want that too - and from what I saw this morning, they sincerely do - I still have a few years before my contact expires.

"I thought long and hard, but never managed to convince myself during these months of reflection that I had to go to FIFA for these elections. It's as simple as that. Once again, I have chosen to follow my heart. I have chosen football. I have chosen passion.

"UEFA and European football have never been as strong and powerful as they are today and I have every intention of guarding this supremacy."

Platini's decision leaves Blatter with just one opponent for the presidency, former FIFA deputy secretary Jerome Champagne, although declarations to stand for election are not required until January of next year.

The 78-year-old Blatter has been in power at FIFA since 1998 but has recently come under fire for the selection of Qatar as the host for the 2022 World Cup, a decision that has been beset by allegations of bribery during the bidding process and concerns over the severe heat in Arab nation.