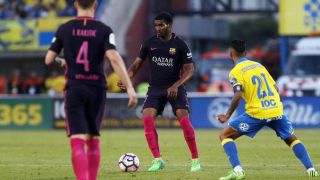 Marlon Santos reflected upon "a unique moment of my life" after being handed a surprise debut in Barcelona's 4-1 LaLiga win at Las Palmas.

The 21-year-old Brazilian centre-back was thrust into action after Javier Mascherano pulled up during the warm-up, with Gerard Pique absent through illness.

Marlon featured as a second-half substitute during the 2-0 Champions League win at Celtic in November, but his top-flight bow came with higher stakes as Barca sought to maintain the pressure on Real Madrid in a title race that will go to the wire.

"I have lived it as a unique opportunity of my life and I tried to give the maximum," Marlon told Barca TV after a hat-trick from countryman Neymar inspired a comfortable triumph.

"I was prepared. I work for this, the opportunity appeared and now I have to continue working.

"I felt safe, because both [Samuel] Umtiti and [Marc-Andre] Ter Stegen conveyed confidence to me. I appreciate the support of all my teammates and the opportunity they gave me."

"I want to congratulate Marlon because it is not easy playing for the first team, away from home in those circumstances," Iniesta told Barcelona's official website.

"He is training and playing with us because he has what it takes."

The Liga title will be decided on the final day. This way for a full analysis of the situation   May 14, 2017

The reshuffled prompted by Mascherano's 11th-hour withdrawal saw left-back Lucas Digne start at right-back before an injury to the Frenchman led to midfielder Andre Gomes coming on to be deployed in defence.

"If there's an example of a player who can play any position, due to physical, technical, and psychological characteristics, it’s Andre Gomes," Luis Enrique said.

"He's ready to win, to play whatever minutes he's asked to, to take advantage of them.

"You've all seen he's physically and technically able to play in any position and when there are players with that mentality, who are motivated to improve and help the team, those are the guys you want to take into battle."

The battle for LaLiga will be decided on the final weekend. Barcelona lead the way by virtue of a superior head-to-head record but Real Madrid have a game in hand at Celta Vigo on Wednesday.