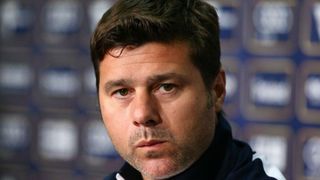 Tottenham manager Mauricio Pochettino says he is honoured to be compared to "one of the best in the world" in Atletico Madrid coach Diego Simeone.

With both sides conducting part of their pre-season programme in Australia, the two former Argentina team-mates will go head-to-head in International Champions Cup action on Friday.

And Pochettino was glowing in his praise of Simeone as he spoke to the media ahead of the game in Melbourne, citing his achievements with Atleti as he ranked the 46-year-old among the world's elite.

"If you compare me to Diego Simeone, that's a big prize, because I consider him one of the best in the world," the Spurs boss said.

"He deserves all the credit because obviously it's difficult to take a team like Atletico Madrid and play finals - the Champions League final - and to win the league in Spain."

Pochettino also responded to questions about the Argentina job, with Jorge Sampaoli reportedly set to take charge, insisting it is a role he hopes to pursue later in his career.

"One day, like me, I'm sure Diego hopes to manage Argentina, but not now," he added.

Friends reunited...Mauricio catches up with boss in Melbourne! July 28, 2016