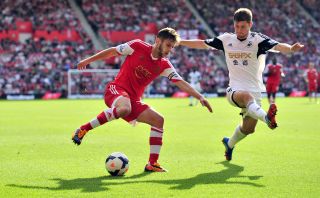 The midfielder played a key role in Sunday's 2-0 Premier League win over Swansea City, opening the scoring at St Mary's in the 19th minute.

Second-half substitute Jay Rodriguez wrapped up the win late on after pouncing on some poor defending by Chico Flores, leaving the visitors ruing a string of wasted chances.

Lallana received a first call-up to the senior England squad for the FIFA World Cup qualifier against Ukraine last month, and Pochettino is certain that he will be back in the picture again if he keeps playing as he did on Sunday.

He said: "Adam is a great bloke, a great professional and I am very happy for him.

"Adam represents all the good values of the club and I am over the moon for him.

"If he keeps on performing as he has today then he will be close to a call-up to the national side."

The win sees Southampton move up to fourth with 14 points, but Pochettino is not getting carried away and admitted that the higher their league position, the more expectation is heaped on him and his players.

"What we have done until now does not count for anything unless we keep the run going."