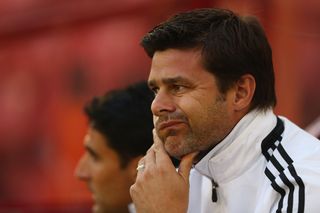 The likes of Rickie Lambert (England), Gaston Ramirez (Uruguay) and Steven Davis (Northern Ireland) have all been called up to their respective full national sides, while Luke Shaw and James Ward-Prowse have been selected to represent England Under-21s.

And, despite the fact that those players are unable to train with Southampton during the international break, Pochettino has welcomed the news of their recognition.

"It's always positive," he said. "We're happy about it, even though we will lose players.

"It's good for the image of the club."

The Argentine offered particular praise to the English players in his squad, and feels that the club's academy should take plaudits for continuing to produce homegrown talent.

"In the months I've been here, I've been happily surprised by those players' mentality and commitment," he continued.

"The development of the project at Southampton and its academy needs to be praised. I want to congratulate the club."

Southampton have taken four points from their opening two Premier League games, after a 1-0 win away to West Brom on the opening day was followed by a 1-1 draw with Sunderland at St Mary's.

They travel to Carrow Road to take on Chris Hughton's Norwich City on Saturday, and Pochettino is expecting a tough test for his team.

"The last time we played Norwich City, they were one of the hardest teams we faced away from home," he added.

"Norwich are very well organised, and they know what they need to do on the pitch."