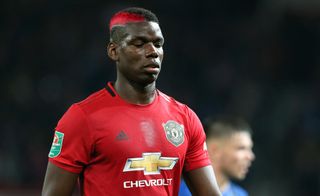 Paul Pogba has not travelled to Holland for Manchester United’s Europa League clash with AZ Alkmaar following specialist advice about a foot injury.

Ole Gunnar Solskjaer’s side continue their Group L campaign in The Hague on Thursday night, when the World Cup winner will be among a number of high-profile absentees.

Pogba played the entirety of last week’s Carabao Cup penalty shoot-out win against Rochdale and Monday’s 1-1 league draw with Arsenal, but an ongoing foot issue means he will not be heading with United to Holland.

The club said: “Following a specialist’s opinion, Paul Pogba requires a period of further rest and conservative treatment for the foot injury he sustained during the game against Southampton in August. Updates will follow in due course.”

Anthony Martial, Phil Jones and Luke Shaw are also absent for the Europa League clash, as is Aaron Wan-Bissaka after missing the Arsenal match with tonsillitis.

Diogo Dalot and Angel Gomes are available for Thursday’s clash, while 19-year-old Brandon Williams has been named in the squad.