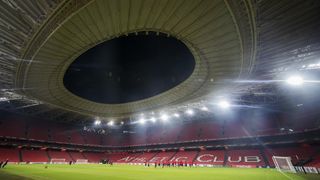 An officer has died after clashes between Athletic Bilbao and Spartak Moscow fans in the Spanish city, the country's national police service has confirmed.

The National Police Corps issued a statement via Twitter on Thursday, in which they offered their condolences to the family of an officer from the Ertzaintza, the regional force of the Basque country.

"A hug and all our affection to the family and colleagues of the Ertzaintza agent who passed away in #AthleticSpartak incidents at San Mames," the police tweet said.

"NO to violence, aggression and barbarity in sport."

He had collapsed shortly after a flare thrown from the group of Russian fans landed nearby, the RFEF said. He was taken to Basurto University hospital, where he was pronounced dead.

"The officer collapsed during the police intervention that took place when fans of both teams faced each other in the promenade of the San Mames stadium, and moments after a flare thrown by a Russian fan landed close to him," the RFEF said.

"The RFEF wants to express its most resounding condemnation of every kind of violent demonstrations by groups of fans who use sporting events to provoke incidents and riots."

Television footage has shown groups of supporters throwing objects at each other and police outside the stadium before kick-off, after earlier scuffles reportedly saw three Russian fans and one police officer taken to hospital with injuries.

At least five people have been arrested for public disorder offences, according to AS.

LaLiga president Javier Tebas said greater restrictions should have been imposed on who was allowed to travel to the northern city for the match.

"This is madness, something very serious," he said, as quoted by AS. "You have to be forceful against ultra [hooligan] violence, you can't give in and everything must be done to eradicate it once and for all.

"The Russian ultras should not have travelled to Bilbao. They should have avoided it. The worst has happened, because a life has been lost, which is something irreparable."

deplores and condemns the death of a police officer following incidents before tonight's match between Athletic Club and Spartak Moscow and extends its deepest condolences to his family and friends. Say no to violence.February 22, 2018