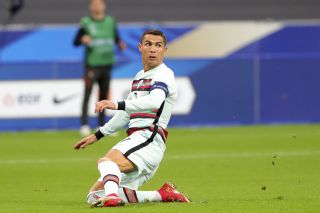 The 35-year-old is said to be “doing well, without symptoms, and in isolation”, with no further positive tests reported in the squad ahead of Wednesday’s Nations League match against Sweden.

The PFF confirmed in a statement: “Following the positive case, the remaining players underwent new tests this Tuesday morning, all with a negative result, and are available to Fernando Santos for training this afternoon, in Cidade do Futebol.

“The game (against Sweden), counting for the qualification phase of the Nations League, is scheduled for Wednesday, at 1945, in Alvalade.”

Former Manchester United and Real Madrid forward Ronaldo had played in both of Portugal’s matches so far during the international break.

Ronaldo started against Spain in Lisbon, coming off late on during the second half of the goalless draw, and then played the whole of the Nations League A3 fixture against France in Saint-Denis on Sunday.

He had scored in each of his Serie A appearances this season, including a brace in the 2-2 draw against Roma on September 27.

Juventus are set to play Crotone on Saturday, which Ronaldo will miss as he undertakes a period of self-isolation.

Given the timeframe, which can range between 14 and 21 days under the latest travel guidance, the Portugal forward would also not be available for the Bianconeri’s opening Champions League group fixture away to Dynamo Kyiv on October 20.

Juventus are scheduled to take on Barcelona at home in a high-profile European tie on October 28, which would give Ronaldo a limited opportunity to be back in full training if permitted to return following a negative test.

The Italian champions confirmed procedures had been swiftly implemented to allow the squad to continue with training and matches.

A club statement read: “In compliance with the regulations and the protocol, the team has entered, as of this moment, into fiduciary isolation.

“This procedure will allow all persons negative to the controls to carry out regular training and match activities, but with no contact with people from outside the group.

“The club is in constant contact with the competent health authorities.”