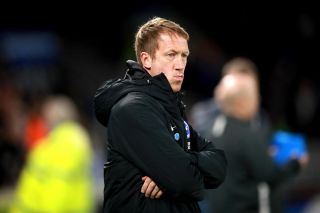 Brighton boss Graham Potter thinks his team need a bit more quality if they are to return to winning ways in the Premier League.

Albion dug in and battled hard at Bramall Lane on Saturday as they fought back from a goal down to earn a 1-1 draw with Sheffield United.

While Potter was happy with a point that edged his side four points clear of the relegation zone, he saw Brighton’s winless run extended to seven league games.

“It’s about points and getting something from the game, so I’m pleased about that, but there are aspects I’d like to improve,” said Potter.

“We probably played better at home against them and lost 1-0. We’ve had a lot of games like that this season where we’ve played better and not come away with something.

“So we need to balance the two and maybe have a bit more quality about us if we are going to go and wins game.

“Sheffield United make it very difficult in a hostile ground so we are proud of the effort of the players.”

Brighton centre-half Adam Webster praised his side’s resolute defensive display and is hoping for more of the same against rivals Crystal Palace next weekend.

“They put us under a lot of pressure but we reacted very well and didn’t give them many chances,” he told the club website.

“The main thing is if you can’t win, don’t lose. That’s what we’ve done in the last couple of games and if we can come away with a win next week then that will be massive for us.”