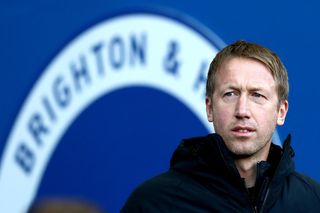 Brighton boss Graham Potter is hoping to earn the cold shoulder from his friends by leading his side to victory over Aston Villa on Saturday.

The Solihull-born 44-year-old may have started his career at Birmingham, but he started out as a Villa fan, along with many of his friends.

Brighton currently sit 14th in the table but are only three points clear of Dean Smith’s Villa, who occupy the final relegation spot.

But Potter refused to label Villa’s trip to the Amex Stadium as a ‘six-pointer’ despite the poor form of both sides heading into the Premier League clash on the south coast, even if he is ready to get the silent treatment from his pals.

“Most of my friends are Villa fans. So they’re not my friends at the moment – at least for this weekend,” he said.

“The first team I actually started to get interested in was the Aston Villa side that won the European Cup.

“Most supporters will tell you, ‘hang on, you can’t be Birmingham and Aston Villa, you’ve got to be one or the other’, but I think I pretty much was – I have to be diplomatic as I’m from Birmingham.”

Potter explained that a chance meeting with a pair of Villa’s 1982 European Cup winners steered him towards the club during his formative years.

“And there’s a photo at home of my brother actually sat in the cup.

“I think Ken McNaught and Peter Withe came to the Shirley British Legion! I don’t think you’d get that these days, would you?

“After that I was interested in Aston Villa. They had players like Gary Shaw and Tony Morley.

“Then, as I got older, I started playing for Birmingham City, went to their centre of excellence and ended up having an affinity for them too.”

With one win from their past seven Premier League games, taking three points against Villa could prove significant in helping secure Brighton’s top-flight status for another year.

“We know we have to attack and defend well,” Potter added.

“They’ve moved to a back five recently and that can mean it’s sometimes tough to create chances.

“They have good players and when you lose the ball they can hurt you, that’s just the nature of the Premier League, and so we have to be on our game to get a result.

“It’s been nice to have a full week of training after a busy Christmas period and we’ve had a lot of time for prepare for the game, so we feel good in that respect.”