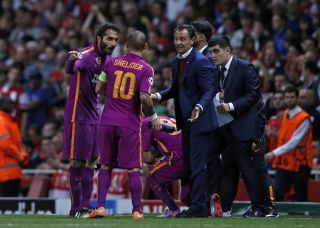 Prandelli, who had captain Selcuk Inan withdraw late, sent his side out in a 3-5-2 formation that was torn to shreds by Arsenal's rampant attack before half-time.

Danny Welbeck netted a double inside the first half-hour before Alexis Sanchez effectively ended the game as a contest in the 41st minute.

Welbeck completed his hat-trick and Galatasaray's misery seven minutes after half-time, meaning Wojciech Szczesny's red card for a professional foul on Burak Yilmaz - who converted the resultant 63rd-minute penalty - was never likely to have an impact on the result.

"We made some errors in one-on-one situations," said Prandelli, who saw Burak snatch a last-gasp 1-1 draw at home to Anderlecht in Galatasaray's competition opener.

"There was nothing wrong with the tactics. We should have been more active. We always have to be ready to play more aggressively.

"Our first-half performance was negative. In the second half, there was a little tactical change and we started to play with more width. Thus, they felt comfortable. We'll gradually decide on our ideal formation."

Felipe Melo struggled at the heart of Galatasaray's back three and Prandelli - who inherited the squad from countryman Roberto Mancini in the close season - accepted his share of the blame for the Brazil international's torrid evening.

"We wanted to put quality and aggression in that position, therefore I opted to field Felipe Melo as a centre-back," he said.

"I take all the responsibility for this. We're trying to settle into a new system."