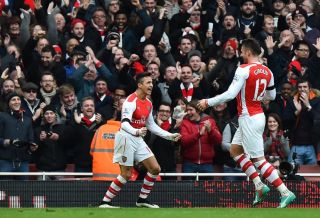 The irrepressible Sanchez scored his 11th and 12th Premier League goals of the season either side of half-time after setting up Laurent Koscielny's early opener at the Emirates Stadium.

David Ospina was handed a first top-flight start in Arsenal's goal as Arsene Wenger dropped Wojciech Szczesny, who was caught smoking in the dressing room after the New Year's Day loss at Southampton.

But Stoke were rarely able to get near the Colombian, let alone test him, in a game that was dominated throughout by the hosts.

It was a completely different story for Ospina's opposite number Asmir Begovic, to whom Stoke were grateful for keeping the score down as they slipped to defeat at the Emirates for a seventh successive season.

Stoke boss Mark Hughes gave a debut to Philipp Wollscheid in defence and was able to call on Bojan Krkic after the Spaniard's hamstring injury - but it was another ex-Barcelona man who stole the headlines, as Sanchez lit up yet another Premier League game.

On a day full of positives for Wenger, Mesut Ozil made his long-awaited return from injury as a late replacement for Olivier Giroud.

However, Mathieu Debuchy's enforced early withdrawal with a serious-looking shoulder problem may temper the Frenchman's joy.

Stoke were served warning of Arsenal's attacking intent before Koscielny broke the deadlock in the sixth minute, with Sanchez and Tomas Rosicky both forcing Begovic into fine saves.

And it was from the corner subsequent to the Czech's effort, which Begovic tipped wide, that the hosts made their pressure pay.

Sanchez's initial effort was cleared, but his second was an inch-perfect cross, which an unmarked Koscielny glanced past Begovic from eight yards.

There was no let-up on the siege on Begovic's goal after the opener, with the Bosnia-Herzegovina international again called into action to deny Giroud.

But there was nothing Begovic could do to stop the outstanding Sanchez shortly after the half-hour mark.

In a goal reminiscent of the onlooking Thierry Henry, Sanchez dipped in from the left wing and played a slick one-two with Rosicky before firing past Begovic at his near post.

And Sanchez picked up where he left off in the second half, adding his second soon after the restart.

For once, Begovic could have done better as he allowed the 26-year-old's low free-kick to squirm beyond him into the bottom corner.

Sanchez was clearly in the mood for his first Arsenal hat-trick, and went close to completing his treble with an audacious 40-yard lob that had Begovic scrambling.

Geoff Cameron saw a scrappy effort disallowed for offside and Ospina got down smartly to deny substitute Stephen Ireland and preserve a clean sheet.

But that was as good as it got in a limp display from Hughes' men, as they slumped to their almost obligatory defeat at the Emirates.

Arsenal, meanwhile, move above arch-rivals Tottenham into fifth, closing the gap to fourth-placed Southampton in the race for a UEFA Champions League spot.