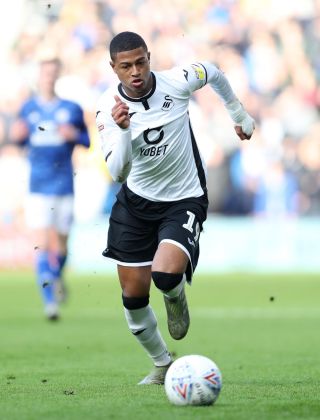 Play-off contenders Preston and Swansea both lost ground in the race for promotion after playing out a 1-1 draw at Deepdale.

Liverpool loanee Rhian Brewster scored his second goal for the Swans to cancel out Scott Sinclair’s opener against his old club.

Sinclair’s hat-trick in the 2011 Championship play-off final sent Brendan Rodgers’ Swansea to the Premier League for the first time and he briefly appeared to have dented the Swans’ latest bid to return to the top flight before Brewster’s leveller.

Despite extending their unbeaten run in the league to four games, the Lilywhites fell three points behind sixth-placed Bristol City.

The draw leaves Swansea four points off the final Championship play-off spot as they bounced back from defeat at Stoke but failed to win at Deepdale for the first time since 2008.

In a cagey start to the game, George Byers forced Declan Rudd into the first save with a volley and Andre Ayew went close with a header at a corner.

But Sinclair opened his Preston account in the 28th minute slightly against the run of play in the game’s first moment of real quality.

The visitors’ defence backed off and allowed the former Swansea man to advance and find the far corner with a delightful curling effort.

The ex-Manchester City striker celebrated the goal – his first in English football since October 2015 – with gusto after joining North End last month from Celtic.

The contest burst into life following the goal as the Swans hit back less than five minutes later.

Conor Gallagher slipped in Ayew on the right and the Ghana international presented Brewster with a simple finish from close range, amid vociferous Preston claims for offside.

The away side finished the first half strongly as Gallagher fired over from the edge of the area while Bersant Celina stung the palms of Rudd with a long-range effort.

Celina had a good chance to give Swansea the lead after being played in by Ayew, but his touch deserted him at the wrong moment and Rudd collected.

Preston pressed for the winner in an end-to-end and error-strewn finish to the game, but Freddie Woodman held firm for the visitors to parry Bauer’s header as the Swans held on for a point.