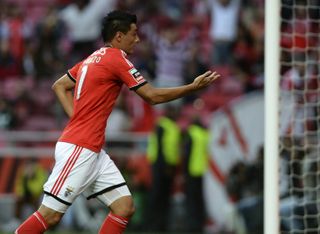 Benfica are now five points behind defending champions Porto after their latest slip-up in the Portuguese top-flight, with the result leaving them in fifth position.

Jorge Jesus' side, who have endured a mixed start to the season, claimed the lead after just 18 minutes when Paraguay forward Oscar Cardozo was on target.

Cardozo's goal - his second in as many matches - only gave Benfica the lead for 13 minutes, though, as Mali midfielder Mourtala Diakite popped up with an equaliser.

And, despite Jesus chasing the game with a range of substitutions, Benfica were held by a side who are in the relegation zone and have won just once in six league matches this season.

Sporting Lisbon are just two points behind Porto after climbing to second with a 2-1 away win against 10-man Braga.

Colombian Fredy Montero gave Sporting the lead after just five minutes, although Alan produced a leveller before the break.

The straight red card shown to Aderllan Santos in the 31st minute harmed Braga's cause, however, and they were the victim of a late blow as Cedric Soares netted a winner with just four minutes to play.

Elsewhere, rock-bottom Pacos de Ferreira notched their first win of the season with a superb 4-3 triumph at Maritimo, a match in which they trailed three times.

Derley's double and an Igor Rossi strike saw Pacos trailing 3-2 with just under 30 minutes to play, but the visitors - who had earlier scored through Rui Caetano and Manchester United loanee Bebe - staged a fightback.

Substitute Manuel Jose levelled proceedings with 21 minutes to play before Igor Rossi turned villain as his own-goal in the 89th minute handed the strugglers an unlikely win.

Other results on Saturday saw Nacional defeat Rio Ave 3-0, while Estoril triumphed 2-1 at Olhanense and Academica and Arouca played out a goalless draw.