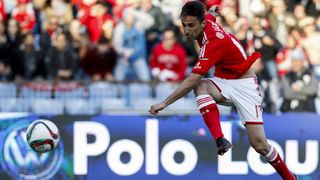 Jorge Jesus' side brushed aside the challenge of Belenenses ahead of next weekend's top-of-the-table clash with fierce rivals Porto.

The league leaders made a fast start and were ahead after six minutes – albeit with the help of some calamitous Belenenses defending.

A loose back pass forced Hugo Ventura off his line, but the goalkeeper's clearance fell to the feet of Jonas and he fired into the unguarded goal.

The Brazilian striker doubled his tally on the hour as he superbly controlled a free-kick on his chest before lashing into the bottom corner across Ventura.

Porto ensured they stayed in touch with Benfica thanks to a 1-0 win against Academica.

Still revelling in their UEFA Champions League victory over Bayern Munich on Wednesday, Julen Lopetegui's men were immediately on the attack and got their reward on 12 minutes.

Hernani was released behind the Academica defence, he stretched away using his pace and, although his first effort was saved by Cristiano Pereira, he made no mistake with the rebound.