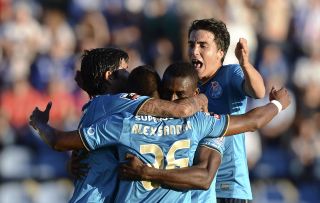 Paulo Fonseca's side moved back to the summit, after Sporting Lisbon briefly went top following their 4-0 rout of Vitoria Setubal on Saturday.

Fredy Montero's brace for Sporting sandwiched Andre Carrillo's strike before Adrien Silva made it four from the penalty spot.

Belenenses also played on Saturday and moved ahead of Arouca into 11th courtesy of a 2-0 home success over Olhanense.

Porto's win at the Estadio Municipal de Arouca extended their unbeaten start to the new campaign.

Colombian striker Jackson Martinez scored either side of half-time to give Porto a commanding lead .

Pintassilgo halved the deficit in the 89th minute, but Juan Quintero responded in the second minute of injury-time to restore his side's two-goal cushion.

Benfica made it six league games without defeat as a 2-1 success away to Estoril sent them third.

Jorge Jesus' charges moved ahead after 10 minutes when Brazilian Lima opened the scoring.

Filipe Goncalves was then sent off for the home side for a second bookable offence, before Oscar Cardozo piled on the misery with Benfica's second in the 71st minute.

Javier Balboa pulled a goal back almost immediately, but Estoril were unable to force an equaliser despite Maxi Pereira receiving his marching orders in the closing stages.

Mario Rondon opened the scoring in the sixth minute with his third goal of the season and Djaniny doubled the advantage shortly before the break.

Manuel Machado's side wrapped up their victory courtesy of Daniel Candeias' 74th-minute strike.

Pacos de Ferreira remain bottom of the league after falling to a 2-1 defeat at Gil Vicente.

Pecks broke the deadlock in the 71st minute and Gil Vicente extended their lead 10 minutes later through Joao Vilela.

Tiago Valente grabbed a consolation for Pacos in the third minute of injury-time, but the damage had already been done.