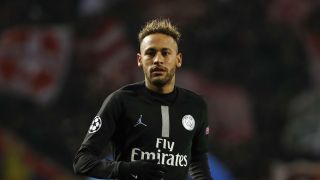 Paris Saint-Germain can reach the Champions League final even without Neymar, according to Brazil great Cafu.

The Ligue 1 giants laid down a marker with a 2-0 win away to Manchester United without the injured Neymar and Edinson Cavani in the first leg of their last-16 tie on Tuesday.

Cafu, who won Europe's top club competition with AC Milan in 2006-07, said PSG showed they were capable of getting to the decider without Neymar.

"All 16 teams that are competing in the last 16 of the Champions League have full potential to win, regardless of whether you lose your biggest star or not," he said on Sunday.

We take a 2-0 lead to the second leg at the Parc des Princes on March 6! #MUPSG#AllezParispic.twitter.com/z2l3zQqqRK— Paris Saint-Germain (@PSG_English) February 12, 2019

"He is a reference, but if you see the first game of Paris Saint-Germain away from home, with the achievement that they made, you see that PSG have a chance to reach the final.

"But, of course, with Neymar there is a further hope of victory and conquest."

Already 12 points clear in Ligue 1, PSG are bidding to win the Champions League for the first time.