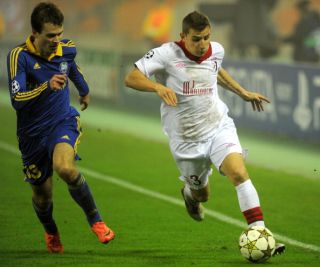 Left-back Digne, 19, moves to the Parc des Princes for a fee thought to be in the region of €15million.

A product of the Lille academy, Digne has impressed many with his assured performances, and was part of the France side that won the recent FIFA Under-20 World Cup.

Monaco were reported to have been interested in Digne's signature, but he has instead opted to join PSG as they attempt to build on the Ligue 1 title they clinched last term.

He told the club's official website: "To play for Paris Saint-Germain, with these exceptional players, is a dream come true. I'm very happy. After the World Champion title in Turkey, I am having an incredible summer. I would like to thank the club for the confidence they have placed in me."

PSG president Nasser Al-Khelaifi added: "Lucas Digne, a rising star of French football and recent winner of the U20 World Cup, was the subject of transfer interest from a number of major clubs and has chosen Paris Saint-Germain to continue his progression on the European stage. We are delighted to welcome this young French player into our squad."

A mainstay of the Lille side last campaign, Digne will be expected to compete with former Barcelona man Maxwell for a place in Laurent Blanc's starting eleven.