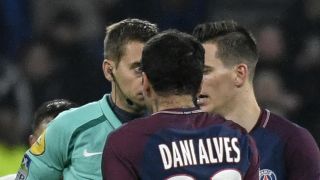 Paris Saint-Germain will be without Dani Alves for three games after the right-back was banned following a referee confrontation.

During Sunday's 2-1 loss at title rivals Lyon, Alves was dismissed for screaming in the face of referee Clement Turpin after he was adjudged to have brought down Tanguy Ndombele.

Memphis Depay's late wondergoal went on to secure all three points for Lyon, cutting PSG's lead at the top of Ligue 1 to eight points, while Kylian Mbappe was injured during the game after a collision with goalkeeper Anthony Lopes.

Following Thursday's disciplinary committee of the Ligue de Football Professionnel, it was confirmed Alves will be given a four-match ban, with a quarter of the punishment suspended.

PSG will now have to face Montpellier in Ligue 1 on Saturday without their first choice right-back, with Thomas Meunier likely to fill in for the league leaders.

Alves will also be unavailable for Tuesday's Coupe de la Ligue semi-final at Rennes next Tuesday and February 3's Ligue 1 trip to Lille.

Meanwhile, PSG have been handed an away draw in the last 16 of the Coupe de France, with Unai Emery's men set to visit second-tier side Sochaux.