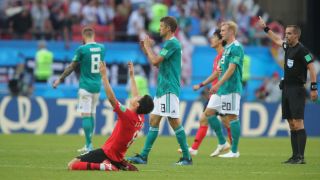 Germany suffered the ignominy of failing to get past the opening round of a World Cup for the first time since 1938 on Wednesday, and the media - both local and international - were quick to stick the boot in.

Because Sweden defeated Mexico 3-0 in Group F's other game in Ekaterinburg at the same time, Germany needed to just beat South Korea and they spent most of the game on top.

But they were devoid of craft in attack and, as their attempts to salvage a result got desperate, Korea picked them off on the break, scoring twice in second-half stoppage time to seal Germany's fate.

As such, they became the third successive world champions to fall at the first hurdle after Italy and Spain.

And the ridicule has been as brutal as expected from abroad, while the anger in the German media has been palpable.

The Frankfurter Rundschau labelled the exit an "historical debacle" online, as Joachim Low calmed any suggestions his resignation was imminent.

Handelsblatt poked fun at the idea of Die Mannschaft being a "team", before blasting them for "failing collectively" against a "weak" South Korea side.

Die Zeit had a rather more considered approach to their outlook. They wrote: "The German XI does not always have to win, not even in the finals. But it should play better, more modern, faster football than at this World Cup." Because it is just that easy!

Germany's major sports newpaper Bild showed off its front and back pages, going with the simplistic "no words" headline.

Perhaps the most striking comment of all in the German press came from the Frankfurter Allgemeinen Zeitung, who referred to Wednesday's match as a "public corpse show".

The Times in the United Kingdom had a striking front page, showing Son Heung-min knocking the ball into the empty net, accompanied by: "The day the Germans just disappeared".

Over in Italy, Corriere dello Sport revelled in the misery of Germany, while simultaneously making fun of the cliche that German tourists are the first to the sunbeds at European resorts. They went with: "See you at the beach".

Their Italian compatriots at Gazzetta dello Sport were less mocking, instead going with "Default Germania".

L'Equipe of France went down the historic conflicts route. Their headline was "La Berezina", a word often used as a synonym in French for "disaster". However, the Battle of Berezina (1812) did not involve the Germans and was actually on modern-day Belarusian soil, rather than Russian.

Spain's Marca highlighted "the curse of the champions" after Germany became the third successive holders to get dumped out in the group stage. Mundo Deportivo went with "kaputt historico", while AS kept it simple: "Adios Germany!"