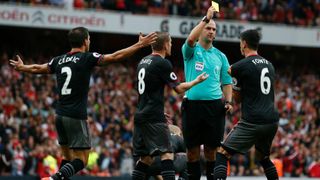 Claude Puel hopes Southampton can put their penalty misfortune behind them when they begin their Europa League campaign on Thursday.

The former Nice head coach has failed to guide his side to a Premier League win since he succeeded Ronald Koeman in June, with Saints managing two draws and two defeats from their opening four matches of the season.

Three of those games have included costly penalties against Southampton, however, with Zlatan Ibrahimovic scoring from 12 yards to give Manchester United a 2-0 win at Old Trafford, before Jermain Defoe forced a point for Sunderland and Santi Cazorla sealed a 2-1 win for Arsenal with spot-kicks in their most recent fixtures.

And Puel is hoping for a little more luck when his side take on Sparta Prague at St Mary's Stadium this week, telling a media conference: "We can say we're unlucky. Three penalties in the first few games, it's very hard for my team.

"I don't know if they're all correct, but it's difficult because it happens at the important points.

"Against United, just at the beginning of the second half, for example. In the last game, after good 90 minutes from my players, I think a draw was normal. So it's very hard."

Puel says the chance to compete in Europe is "exciting" for his players, but has warned that Sparta will offer a stern test.

"I've had many European games but it's a new project for many players in the squad. It's very exciting for the players, for the club," he said.

"They're a very good team. They start with the ball on the ground and it's very interesting to play them."

Defender Virgil van Dijk, meanwhile, wants his team-mates to seize their chance of enjoying a strong run in the competition as they look to put their disappointing recent results behind them.

"I've looked forward to it a lot. It's amazing to be in this competition," said the Netherlands international.

"We need to enjoy it but we can't forget that it's a good opportunity for us to get a good run and maybe progress. With the group we're in, with the squad we have, we can have opportunities.

"It's always going to be difficult when players are leaving, but we have enough good players who can do the job. All we need is a win - if you see our games, we're dominating, we have possession and create chances. It's not been working so well so far but we're confident it will be soon enough."