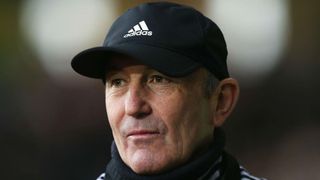 West Brom head coach Tony Pulis bemoaned their lack of quality in the final third after they needed a last-gasp equaliser to draw 2-2 with Bristol City in the FA Cup third round.

The Premier League side took the lead through Saido Berahino in the 67th minute, only for goals from Jonathan Kodjia and Kieran Agard to turn things around and put City on course for a shock win.

However, the Championship side were pegged back in the 95th minute as James Morrison levelled for West Brom to force a replay at Ashton Gate.

"I thought we played really well between the boxes, in the final third our final cross, our final pass, opportunities that dropped for us, it was disappointing we've got to be on a level better than that," Pulis told West Brom's official website.

"But I don't think you could fault the effort of the players and the commitment.

"I think [the comeback] it showed great character again, we're disappointed with the two goals they've scored. I thought Ben [Foster] was very unfortunate with the second, it's a wonderful save, fantastic save, for it to drop to the lad was disappointing.

"We're in the hat, we'll have to go down to Bristol City and win down there."

On Foster - who made his first appearance since March following a knee ligament injury - Pulis added: "I thought he did smashing as well, he didn't have a lot to do but what he did do he did very well."