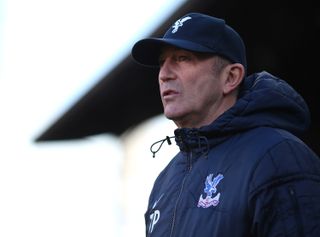 Tom Ince, Joe Ledley and Scott Dann all made their Palace bows after signing for the Selhurst Park club on transfer deadline day.

Ince and Ledley enjoyed particularly good afternoons, grabbing a goal apiece in a dominant first-half display from the hosts.

Ince opened the scoring with a deft finish after 15 minutes, and swung in the corner that Ledley met with a thumping header 12 minutes later.

West Brom did pull one back through Thievy Bifouma - another debutant - at the start of the second half, but a Marouane Chamakh penalty with 21 minutes remaining put the result beyond doubt.

Pulis was especially satisfied with the efforts of England Under-21 international Ince, who has joined on loan from Blackpool until the end of the season.

"I was pleased but I think the biggest thing about Tom was actually his work and the way he did all the unglamorous stuff that good players do," said the Welshman.

"He took his goal with aplomb really and we've been moaning a little bit that we've not scored enough goals from set-plays and Joe's header was first class.

"We are pleased with him (Ince), Dann and Ledley.

"The big thing for the team is that the players who have been at the football club have done exceptionally well, so the players we bring have to work as hard as they do and add that little bit more quality."

The win lifted Palace to 13th in the table, albeit only three points clear of the relegation zone, and Pulis insists it will take a collective effort to secure the club's top-flight status.

"I'm pleased for the group," he said.