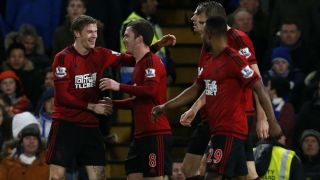 Tony Pulis is elated with West Brom's consistent resilience as they came from behind twice to earn a point against Chelsea.

The visitors rescued a 2-2 draw in an entertaining Premier League encounter at Stamford Bridge, thanks to James McClean's 86th-minute equaliser.

It is the latest in a series of strong displays from losing positions by Pulis' side, who have come from behind to defeat Arsenal and secure draws against Tottenham and Liverpool already this season.

Such character in the "relentless" Premier League has impressed the coach, and he feels it will aid their bid for survival.

"That's the fourth game where we've come from behind to get something out of a game which shows good character and good spirit," Pulis said.

"We have a tough game again on Saturday [against Southampton]. We need 13 points to get to 40.

"It's such a relentless league. You've that again seen today - every game is tough."

Pulis confirmed an aggravation of an existing hamstring injury resulted in James Morrison's seventh-minute substitution, while Jonas Olsson struggled with a similar issue too.

"James has felt it the last couple of days but wanted to play. He felt his hamstring straight away so we took him off," he added.

"We nearly took Jonas off just before half-time as well because he felt cramp in his hamstring and we don't want to lose him.

"With the run of games coming up and the amount they play, it's important you manage the players well.

"We're pleased to get the point and pleased to come away with everybody apart from James fit."