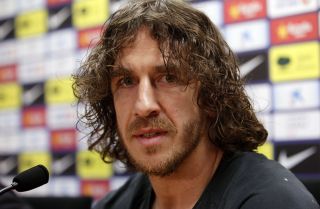 The Spain international underwent surgery in June to remove a cyst from his right knee, and missed the opening months of the campaign as a result.

But the 35-year-old made his first appearance of the season against Javi Gracia's charges, as Barcelona dropped their first points of the season in a 0-0 draw at the Estadio El Sadar.

And Puyol felt in good shape after the match but was disappointed not to pick up three points.

He says it is now imperative the team switch their focus to the club's UEFA Champions League fixture with Milan on Tuesday, the team against which his latest injury problems began last season.

"These past months have been difficult for me," he said.

"I am happy with how I felt on the pitch but not with our result. Now we must rest, recover and start thinking about AC Milan."

Barcelona sit at the summit of the Liga table, with 25 points amassed from a possible 27 thus far.

Gerardo Martino's men head into their Champions League fixture with Milan having won both of their opening Group H fixtures against Ajax and Celtic respectively.