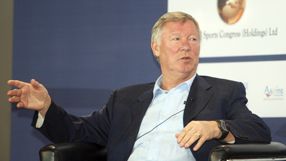 "I would back the Qatar bid," Ferguson told a sports coference. "I admire their purpose and vision."

Ferguson added that the Gulf state had a "marvellous chance" of hosting the finals, even amid worries about temperatures that can rise to 50 Celsius.

His remarks came shortly after world soccer's governing body FIFA published its technical reports on the bids to stage the 2018 and 2022 World Cups.

FIFA said that, despite proposals for cooling the stadiums, Qatar's bid to host the 2022 tournament could pose a potential health risk because of the midsummer heat.

Qatari organisers say they have tackled the issue by constructing climate-controlled, zero-carbon emitting stadiums. The country has harnessed solar-powered technology to cool stadiums to about 27 Celsius.

Ferguson said the idea of dismantling modular stadia to be shipped to developing countries would be "absolutely fantastic" for football across the world.

All of Qatar's stadiums would be partly dismantled after the finals, with the extra seating shipped to developing nations who could reconstruct them as smaller stadiums for their own use.

"Addressing the hot climate issue and transporting the stadia to countries is very clever," added Ferguson.

Qatar is competing with the United States, South Korea, Japan and Australia for the right to host the 2022 tournament. It would be the first Middle East country to stage the event.

FIFA president Sepp Blatter will announce the winning bid in Zurich on December 2, following a vote by the executive committee.