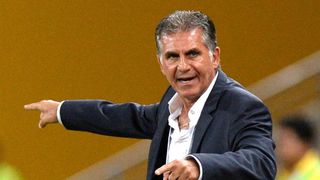 It appeared as though UAE would finish top of Group C on goal difference as the match at Suncorp Stadium was deadlocked at 0-0 heading into stoppage time.

However, Iran secured first place when substitute Reza Ghoochannejhad nodded home in the 91st minute and the goal stood despite suspicions of offside.

And coach Queiroz was happy to come away with victory against a team he considers the best in West Asia.

"Congratulations to our players, they showed good concentration and played with a fantastic attitude and were willing to sacrifice for the team," he said.

"We played a passing game and were better than the UAE in terms of penetration and movement. It was a great football game, very emotional and skilful.

"It was a good win against the UAE as, in my opinion, they are the best football team in West Asia.

"They have excellent players and have played together for a long time. It is difficult to play against them."

UAE coach Mahdi Ali, who could now face defending champions Japan in the quarter-finals, stated his team were unfortunate to not take at least a point.

"This is football. Sometimes, you see the side of football you don't want to see," he said. "We didn't deserve to lose the game but we lost.

"We were not playing this game to try to avoid Japan. We wanted to win the group because it would have given us more motivation for the second round.

"We don't have a problem playing Japan or any other team."