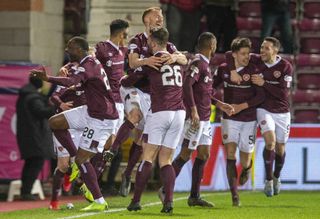 Rangers were brought crashing back down from their continental high as Hearts’ Oliver Bozanic dumped Steven Gerrard’s team out of the William Hill Scottish Cup.

The Ibrox outfit were hoping Wednesday’s stunning Europa League win over Braga would spark a turnaround in domestic fortunes.

But instead they face another trophyless season unless they can battle through from the last 16 in Europe after Bozanic handed Daniel Stendel’s Ladbrokes Premiership basement boys a shock 1-0 win at Tynecastle.

The big news before kick-off was the absence of Rangers’ top-scorer Alfredo Morelos after he was disciplined for returning late from a trip to Colombia.

Referee Steven McLean was centre-stage with a string of bizarre decisions which infuriated both sides.

But Hearts were not complaining at full-time as they marched into the Hampden semi-final with their second win over Gers in the space of a month.

Morelos was expected to return after being suspended for Wednesday’s stunning win in Portugal.

But instead the Colombian was dropped after upsetting Gerrard by reporting back late from an agreed trip to his homeland to deal with a family matter.

It was the last thing the Ibrox boss needed as Gers looked to capitalise on the euphoria of their midweek victory, which sets up a clash with Bundesliga giants Bayer Leverkusen.

With Florian Kamberi cup-tied and Jermain Defoe only fit enough for the bench, Greg Stewart took over up front while Liam Boyce – January’s match-winner – was also a substitute after a bout of illness.

As if that was not dramatic enough, the 45 minutes which followed were incident-packed.

There was just 14 minutes gone when John Souttar went down off the ball, clutching the same Achilles he ruptured back in 2017, with Clevid Dikamona replacing the defender.

Gers were lucky not to then lose Ryan Jack when he lunged in late on Michael Smith.

From the resulting free-kick, Steven Naismith saw a header tipped over by his old Ibrox team-mate Allan McGregor before Loic Damour’s scrambled effort was blocked by James Tavernier.

Then came the flashpoints as referee Steven McLean’s control of proceedings evaporated.

He got his first big call all wrong as he denied Gers a penalty when Ryan Kent found himself flattened by Damour’s bodycheck in the 35th minute, leaving the Gers bench stunned.

Hearts were just as aggrieved when the official then failed to spot George Edmundson’s blatant penalty-box handball in first-half stoppage-time, instead giving a corner.

And for a moment it looked like he had given a goal to Damour when the Frenchman used both hands to punch the ball over McGregor from the resulting delivery before belatedly ruling the goal out.

McLean found himself surrounded as the teams went down the tunnel, with Hearts still arguing over their failed spot-kick appeal and McGregor demanding an explanation why Damour – already on a yellow for tripping Kent – had not been shown a second.

🙌 Ollie Bozanic wheels away in celebration after giving Hearts the lead against Rangers pic.twitter.com/QRGcAGfuR0— Heart of Midlothian FC (@JamTarts) February 29, 2020

The four sides of Tynecastle united to let the official know what they thought of him as the teams returned.

However, in the 58th minute it was only the home faithful making any noise as they erupted when Bozanic’s strike hit the net.

Tavernier left McGregor in no-man’s land with a poor backwards header from a Conor Washington’s hook and Lewis Moore took full advantage, rounding the keeper before cutting back for the Australian to sweep home.

Rangers knew their best hope of lifting a trophy this term was slipping away. Kent forced a save from Zdenek Zlamal while Gerrard threw on Ianis Hagi and Defoe to lead his rescue mission.

But it was Hearts who almost added a second with quarter of an hour left as Naismith poked wide after an Edmundson blunder.

The young Rangers defender was man of the match in midweek but he then blew the chance to become Rangers’ weekend saviour as he headed two glorious front-post opportunities over Zlamal’s goal to leave the path clear for Celtic to wrap up another domestic treble.