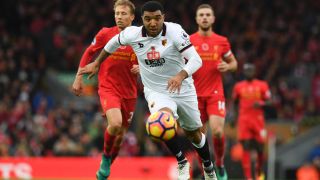 The Italian reportedly made numerous bids for the 28-year-old in the off-season, with offers up to £25million.

After missing out on the Watford captain, Ranieri now feels he has the plans to contain Deeney – who has three league goals this season – in the Premier League on Saturday.

"Wes [Morgan] and Robert [Huth] are very good players and they know how to stop [Odion] Ighalo and Deeney," Ranieri told UK newspapers.

"But Deeney for me is a very good player - not only for me, also for Watford. He is an intelligent player, a hard worker and knows football very well.

Ranieri has no regrets over missing out on Deeney, having instead added Islam Slimani to his squad in the off-season.

Slimani has scored three goals in six league games for Leicester, who sit 14th in the table.

"The market is the market and you have a range of players," Ranieri said.

"At the beginning you try to bring in what you want and afterwards you have to change and find a new solution."