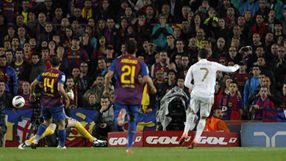 Ronaldo's 73rd-minute strike was his third goal in his last three visits to the Camp Nou and extended his La Liga record tally this season to 42, one more than Barca forward Lionel Messi, who succeeded Ronaldo as World Player of the Year.

Messi, who had scored 13 times in 18 previous 'Clasicos' compared to five in 15 for Ronaldo, had a quiet night by his high standards and cut a forlorn figure at the end of the game as the Real players celebrated wildly.

The win, a first for the club in eight league games against Barca, put them seven points clear of their bitter rivals with four matches left and within touching distance of a first La Liga title in four years.

Ronaldo, who now has 54 goals in all competitions this season to Messi's 63, had earned a reputation as a player who failed to perform in important matches but Saturday's exhibition will help dispel that image.

"It was a very important goal because it earned the three points for us," the Portuguese told reporters.

"I have scored the last three games I played here, but the key to the match was the team," added the 27-year-old, who became the world's most expensive player when he joined Real from Manchester United three years ago.

"The seven-point lead leaves us in a comfortable position, but we have to remember that the next games are also key.

"The team is in good shape, on form, happy, filled with desire and aware of its responsibilities."

Ronaldo has another chance to prove he can produce when it counts when Real seek to overturn a 2-1 deficit in Wednesday's Champions League semi-final second leg at home to Bayern Munich.

Real are seeking a 10th European crown and could play Barca again in next month's final if the holders can recover from Wednesday's 1-0 reverse at Chelsea in their semi-final second leg on Tuesday.

"Cristiano is the best player in the world," Real assistant coach Aitor Karanka, standing in for his boss Jose Mourinho who again declined to speak to the media, told a post-match news conference on Saturday.

"Cristiano is always there when you need him," former Real striker Emilio Butragueno, now a club director, said in an interview with Spanish television.

"I am pleased for him and for the goal because he is important," he added. "In a key game he scored a goal that could give us a lot of joy."