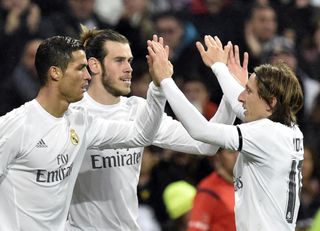 Sanchez appeared on Cadena Ser on Thursday night to protest Madrid's innocence following their two-window transfer ban, imposed by FIFA earlier in the day after they allegedly violated regulations "relating to the international transfer and registration of players under the age of 18".

The sanction means Madrid, and city rivals Atletico, will not be able to register new players until the start of the 2017/18 season.

Sanchez reiterated Madrid will appeal and insisted the club had complied with FIFA and RFEF (Spanish Football Federation) guidelines.

He also claimed the world game's governing body were widening an investigation which also led to Madrid's arch-rivals Barcelona being banned from registering new players in 2015.

Sanchez said: "I understand they have opened files on many European clubs.

"The first was Barcelona but there are many more. I know they have initiated disciplinary proceedings against English teams but I imagine FIFA has limited resources and therefore cannot do it all at once.

"I get the feeling that over the coming years there will be one case after another."

Madrid believe documentation sent by the RFEF to FIFA on April 17, 2014, in addition to papers filed on April 8 last year, will clear them of all charges.

Sanchez added: "They ask for documentation so you are aware you are being investigated.

"But we have full confidence in how we did things and never thought we were going to be punished. We are convinced FIFA's argument is unusual.

"Our case clearly seems to be a mistake. We believe we'll be able to defend ourselves."