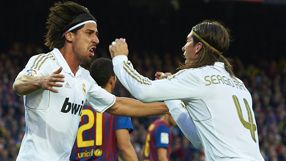 Leaders Real Madrid could be crowned La Liga champions for the 32nd time on Sunday if they beat Sevilla at home, and second-placed Barcelona lose at Rayo Vallecano.

Jose Mourinho's side, on course to lift a first league title in four years, have 88 points from 34 matches and hold a seven-point lead with four games left to play.

Real have romped to 6-2 victories in their last two matches against the Andalucians.

Real have a full squad to choose from but ninth-placed Sevilla will be without suspended midfielder Gary Medel and striker Manu del Moral.

Sevilla have been fined 600 euros by the Spanish football federation after fans threw tennis balls onto the pitch to delay the start of last weekend's clash against Levante in protest at the kickoff time being changed to accommodate the 'Clasico'.

After three consecutive matches without a win, Barca travel to Madrid to play 15th-placed Rayo, for the first game of Pep Guardiola's drawn out farewell after the coach said on Friday he would be leaving at the end of the season.

They will be without injured Spanish internationals Xavi and Gerard Pique.

Third-placed Valencia need to pick themselves up from Thursday's Europa League semi-final exit to Atletico Madrid in time for the trip to fourth-placed Malaga on Sunday.

Unai Emery's side have a three-point advantage in the race for the last automatic qualification berth for next season's Champions League.

Valencia's Spanish youth international Sergio Canales will be out of action for another six months, the club have said, after he had a relapse of a knee injury in Thursday's defeat.

The 21-year-old midfielder, on loan from Real Madrid, had surgery on a damaged ligament in his right knee in October and had just returned to action.

Surprise package Levante, who were expected to be fighting to avoid relegation by now but instead are in fifth place, keep up their push for a first venture into European competition when they host Granada on Saturday.

"We are going through a fantastic period. After so many years of suffering it's a moment for us to enjoy and the icing on the cake would be to qualify for Europe," Levante defender Juanfran told reporters.

Basement side Racing Santander, who have taken only two points from their last 10 matches, have to win at Real Sociedad on Saturday to have any chance of avoiding relegation.

Racing are 11 points behind 17th-placed Villarreal, who host Osasuna on Saturday.