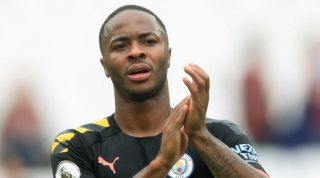 Real Madrid offered to hold talks with Raheem Sterling's representatives earlier this year ahead of a potential future move for the Manchester City forward.

According to The Athletic, Madrid are interested in bringing the England international to the Bernabeu.

Jose Angel Sanchez, the Spanish giants' general director, is said to have invited Sterling's agent for talks about a possible move to La Liga this summer.

Los Blancos had no intention of acquiring the former Liverpool man ahead of the 2019/20 campaign, but they hoped to build a relationship with his representatives ahead of a possible approach in the future.

Madrid spent around £275m on new signings before the European transfer window closed at the start of September, bringing Eden Hazard, Luka Jovic, Ferland Mendy, Rodrygo and Eder Militao to the Spanish capital.

Zinedine Zidane has been tasked with renewing the squad with which he won three consecutive Champions Leagues between 2016 and 2018.

The rebuild is expected to continue at the end of the campaign, with Paul Pogba and Christian Eriksen among Madrid’s targets next summer.

And Sterling has emerged as another player who the club would like to capture, particularly as the winger likes the idea of playing for Madrid one day in the future.

However, the 24-year-old is enjoying life at the Etihad Stadium and does not envisage playing anywhere else in the next two or three seasons.

Sterling has been a revelation under Pep Guardiola, helping City win back-to-back Premier League titles in 2017/18 and 2018/19.

He was named the FWA Footballer of the Year for his efforts last season, and has begun the current campaign with five goals in five league outings.

City are keen to tie Sterling down to a new contract, with director of football Txiki Begiristain telling the forward that the club will be making an offer in the next few months.

Why footballers shouldn't get tattoos - and the science behind it