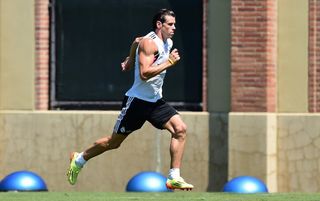 Now, with FIFA World Cup winner Toni Kroos and Colombian star James Rodriguez on board for the upcoming season, Real have set their sights on a large trophy haul, starting with the UEFA Super Cup at Cardiff City Stadium on August 12.

"We enter six competitions and we want to win every one," Bale said. "That would be amazing. We are hungrier than ever.

"No team has retained the Champions League so we want to do that.

"And there is a special touch for me because the Super Cup (against Sevilla) is in my home town (Cardiff). Hopefully we can do the job and get the trophy."

Rodriguez's arrival in Madrid - in a deal worth a reported €80million - was on the back of much fanfare, having won the FIFA Golden boot after scoring six goals in Brazil.

And Bale believes the 23-year-old's switch to Spain is further proof of La Liga's standing in world football.

"The Spanish league is the most exciting and the world's top players play there," he said.

"Barcelona or Real Madrid are always there, near the Champions League final or winning it," he said.

"The Premier League is a great league but we are attracting the best players to La Liga.

"It is great to be involved in it."

Real will contest the International Champions Cup in the United States before flying out to Wales for the Super Cup.