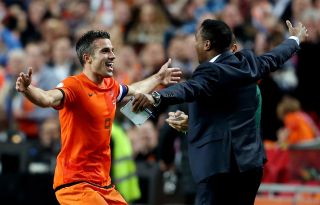 The Manchester United forward scored a hat-trick in the 8-1 FIFA World Cup qualifying rout to take his tally of international goals to 41 overall and move ahead of the country's assistant coach, Patrick Kluivert, in the process.

However, the 30-year-old has revealed that he came close to not featuring at the Amsterdam Arena due to a toe injury.

"I didn't expect to play actually. We took a small gamble," he told SBS6.

"It went better (in) the last days with my toe. This morning we decided that I would play an hour. I didn't expect that it would go like this."

Louis van Gaal's men have already qualified for the showpiece in Brazil next year, but they turned in a dominant showing to maintain their unbeaten record in Group D going into their final qualifier against Turkey on Tuesday.

But Kluivert was keen to reflect on the individual achievements of Van Persie,  adding that he was pleased to see him take on the mantle as the country's top goalscorer.

"My record was always going to be broken," the former Ajax and Barcelona striker said.

"I'm just happy. Robin and I are working together (and) it's just beautiful to me as an assistant coach that he so often scores.

"I give him this (record) wholeheartedly. I have had this record in my hands for 10 years. I'm very proud of it."