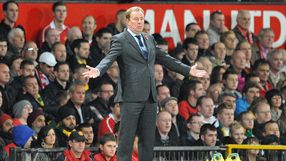 Portuguese winger Nani had a late penalty appeal dismissed and was seen handling the ball whilst lying down.

Goalkeeper Heurelho Gomes then went up to take what he thought was a free-kick, but the United man got up, turned around and tapped the ball into an empty net.

Referee Mark Clattenburg embarked on a lengthy discussion with his assistant before finally awarding the goal having never given a free-kick for handball.

The goal extinguished any hopes of a possible late comeback for Spurs, leaving Redknapp fuming at the decision.

He blasted: “Clattenburg is responsible for one of the worst refereeing decisions ever. He’s had a nightmare.

“I wonder whether Clattenburg would have blown if a Spurs player had done what Nani did at Old Trafford? What a farcical way to finish a game.”

Redknapp awaits a likely charge from the FA for misconduct, resulting in a fine or touchline ban. But United counterpart Sir Alex Ferguson believes Nani actually did the right thing at the time.

“No-one knew what was wrong. Nani looked back and looked at the referee and the referee said play on, so what can he do but put the ball in the net?" he said.

“You can look at the referee and look at the linesmen and blame them, but the goalkeeper should know better. He’s an experienced goalkeeper, I thought he made a mess of it.'”

The Red Devils' skipper Rio Ferdinand also defended the goal on his Twitter account just half-an-hour after the final whistle.

Ferdinand tweeted to his 147,000 followers: “The ref never blew his whistle. We are all taught to play to the whistle. Roles reversed I’d have reacted like Spurs but when the dust settles Nani wasn’t in the wrong if the ref never blew up.

“Gotta play to the whistle, harsh but true."