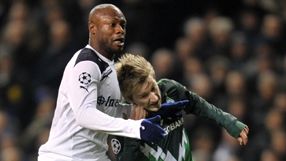 Gallas captained Tottenham to an impressively comfortable 3-0 win over Werder Bremen at White Hart Line, guaranteeing the North London side a place in the last 16 of the competition.

"William was fantastic again, particularly when [Marko] Marin squared him up around the box and I thought we were in trouble," said Redknapp in The Telegraph.

"He shuffled him down the line and kept holding him up, and took the ball off him. It was a bit reminiscent of Bobby [Moore] doing that to [Brazil's] Jairzinho at the World Cup [in 1970].

"Bobby stayed on his feet and used his brain and William has done fantastic for us. I made him captain and he responded again."

Spurs have looked at home in the Champions League and hope to get a result at Twente in the final group game in order to qualify as group winners and, in turn, avoid the top seeds in the last 16.

Redknapp added: "We've enjoyed it so far and if we can get a result at Twente and win the group I think it's a big advantage to try and finish [on top of the group] if we possibly could."