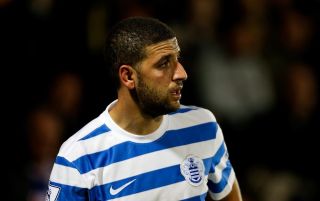 The Morocco international has only played 23 Premier League minutes this season after returning to Loftus Road from a loan spell with Milan.

His two substitute appearances have been scant consolation for Redknapp, who revealed the 25-year-old was not considered for QPR's clash with Liverpool due to a lack of fitness.

Redknapp insists he cannot pick Taarabt in his current state, suggesting he is overweight, and questioned whether the attacking midfielder would ever be in a position to represent the side again.

"He's not fit to play football unfortunately," Redknapp told a post-match media conference. "He played in a reserve game the other day and I could've run about more than he did.

"And that's what I got today from the players.

"When he starts doing that, whether he ever can do it, maybe he'll get a game.

"The other lads, I've got a fantastic group of lads here, absolutely superb, all of them.

"I can't keep protecting people who don't want to run about and train, who are about three stone overweight.

"What am I supposed to keep saying, keep getting your 60, 70 grand a week but don't train? What's the game coming to?"

Taarabt's only start of the current campaign came in the League Cup clash with Burton Albion in August, a game QPR lost 1-0.