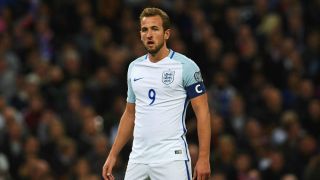 Rooney retired from international football last month, having not played for England since November 2016.

The departure of the experienced forward has left the role of skipper up for grabs ahead of the World Cup in Russia.

Kane led the team against Slovenia at Wembley on Thursday, scoring the only goal of a 1-0 win in injury time to secure qualification for next year's finals.

And Redknapp, who was capped 17 times by his country, feels the head coach should look no further than the Spurs centre-forward.

Will be incredibly proud to lead out at Wembley tomorrow. Huge game. October 4, 2017

"You've got Jordan Henderson who's the captain of Liverpool, I like Jordan a lot," Redknapp told Omnisport.

"You've obviously got Gary Cahill at Chelsea, a good leader. But personally I think it's got to be Harry Kane, for me. Best player we've got. Great striker, in top form, nice boy, he's not the sort of guy who's going to court any controversy.

"I think he'll be the ideal candidate. It's up to Gareth. History suggests somebody like Harry Kane would be perfect to be the England captain."