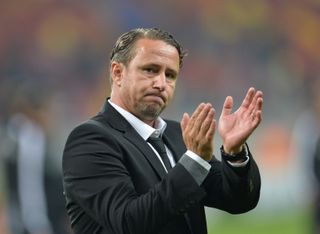 A sublime Marcelo Diaz strike gave the Swiss champions the lead after Steaua left-back Iasmin Latovlevici had given the ball away deep inside his own half.

Reghecampf reacted by making three substitutions early in the second half and his side proceeded to dominate, with an equaliser finally arriving in the 88th minute courtesy of substitute striker Leandro Tatu.

And the 39-year-old coach felt that a draw reflected the balance of play.

"But again we made a huge mistake and we were led by Basel, however, the result is fair."

The draw means Steaua are still bottom of the group with just one point after losing their opening two games against Schalke and Chelsea.

"The Champions League is another level and we need to score from every opportunity," Reghecampf said.

"I'll expect a very tough match in Switzerland but we will do everything we can to win."