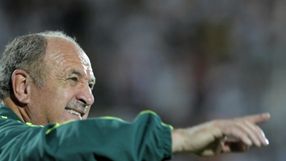 The journalists were protesting after Scolari called a reporter a clown at a news conference in midweek when his team played a match in the Copa Sudamericana, the region's equivalent to the Europa League.

"He needs to be reminded that we're not here to have fun, we're also working. Our radio won't interview Big Phil so long as he doesn't apologise," reporter Ricardo Martins said.

Scolari, who managed an embarrassed grin at his reception, sent one of his players to the post-match news conference preferring not to attend it himself.

He had lost his cool on Thursday after his team were held 1-1 by Atletico Mineiro when he was asked why he had fielded midfielder Jorge Valdivia, who was substituted after only 18 minutes of the game.

"Go you and interview the doctor," Scolari said. "You lot are just clowning around and you're one of the biggest clowns," he said, gesturing towards one television reporter.

In other league matches, Cruzeiro beat bottom team Gremio Prudente 2-0 away to join Flu on 57 points with six matches remaining, although are in second place on goal difference. Flu beat Gremio 2-0 on Thursday.

Corinthians are third, three points behind with Botafogo, on 51 after a 2-0 away win over relegation-threatened Atletico Mineiro, occupying the fourth Libertadores Cup spot.

South American champions Internacional and Santos did their slim title hopes no good with a 1-1 draw in the southern city of Porto Alegre after visitors Santos had a first half goal controversially disallowed. Both are on 49 points.

Video replays showed the ball had crossed the line before defender Nei cleared it with a bicycle-kick but the referee allowed play to continue.

Santos took the lead 11 minutes from time with a goal by striker Ze Eduardo but Leandro Damiao equalised with a header four minutes later.