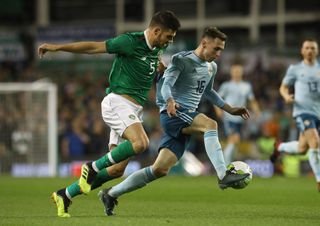 John Egan is determined to make the most of his second crack at the Premier League after having to take a step back to move on in his career.

The Republic of Ireland international headed for England as a teenager when then top-flight Sunderland came calling, but left in July 2014 for Gillingham.
Egan never made a senior appearance for the Black Cats after an horrific leg fracture suffered during a loan spell at Bradford did not help his cause.

Five years on, the 26-year-old is preparing to rub shoulders with English football’s aristocrats after helping Sheffield United clinch promotion from the Sky Bet Championship, just reward for his persistence and determination to bounce back.

Egan said: “Nowadays it’s just really hard to go straight into a Premier League team without having experience of games behind you.

“Personally speaking, my journey so far has been brilliant, I’ve loved every minute of it. Obviously, there were set-backs on the way.

“When I left Sunderland, I was kind of thinking someone in the Championship might give me a chance, but there was no-one really too keen.

“I knew I had to play games. I went to Gillingham and have played regular games and been on an upward curve ever since.

“I’ve always believed in my ability and that I could get to the top, and it’s been good so far – and I still have a good bit to go.”

Egan, who is currently on duty with the Republic of Ireland at a training camp in Quinta do Lago, Portugal, became a YouTube sensation in the wake of promotion when he adapted the lyrics to the Liverpool terrace chant Allez, Allez, Allez in tribute to his team-mates.

Written off as a team of journeymen by some – Ireland team-mate David McGoldrick joined the Blades last summer following a trial after being released by Ipswich – they finished the season as runners-up to Norwich, and the defender insists that achievement should not be taken lightly.

He said: “Sheffield United’s squad is full of players who’ve played in League One, even League Two. There is nothing wrong with playing in League One or League Two, but it shows you the quality is there in those leagues.

“We have players like Didsy (McGoldrick) who has obviously played Championship most of his career. Didsy came to us on trial because the Ipswich manager didn’t fancy him or whatever, and he’s gone on to be our player of the season in a promotion-winning campaign.”