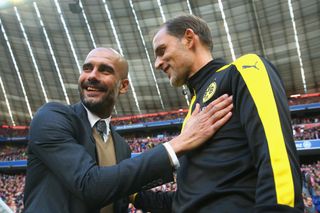 The Spaniard recommended Tuchel for the role back in 2014 when Reschke joined Bayern, prompting him to set up a meeting between the two managers.

Reschke told 11 Freunde that Guardiola had said to him: "Thomas has to become my successor at Bayern."

At the time Tuchel, now Dortmund coach, was on an enforced break after leaving Mainz before the end of his contract.

"I had a trusting relationship with Thomas Tuchel, and knew that he admired Pep's work," the director said.

"Pep, on the other hand, was impressed with Mainz's displays. He often talked to me about Thomas."

Guardiola and Tuchel went head-to-head on Thursday in the International Champions Cup, with the Spaniard's Manchester City beating the German's Dortmund on penalties.