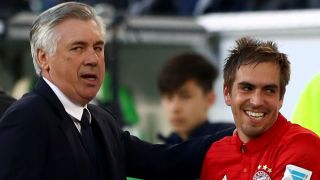 Philipp Lahm will make his final Bayern Munich appearance on Saturday and revealed he has had to reject Carlo Ancelotti's pleas for him to reconsider.

The former Germany international, a World Cup winner in 2014, is retiring from the professional game following Bayern's final Bundesliga fixture of 2016-17 at home to Freiburg this weekend.

In 15 years at Bayern, Lahm has won eight league titles, as well as the FIFA Club World Cup and the Champions League in 2013.

Set for an emotional farewell at the Allianz Arena, the 33-year-old faced the media on Thursday - perhaps a welcome break from having to turn down the requests of his manager.

"Carlo tried everything to convince me not to retire," Lahm said. "Almost every day!

"It will be an exciting day for me, I'm really looking forward to it.

"I can't name a single particular moment, there have been so many. I'll always remember my first game against Lens. I played three minutes!

"I've had time to enjoy the ending. I just hope that the fans will remember me as a good footballer.

Philipp Lahm: "I've had time to enjoy the ending. I just hope that the fans will remember me as a good footballer."  May 18, 2017

"I want to take a step back, do other things, learn about different things, meet new people. Then, who knows? What will I do on my first day after retirement? I will take my son to the kindergarten, empty my locker. And it's also my mum's birthday.

"Franck Ribery told me he would buy me a season ticket for next season if I wanted one."