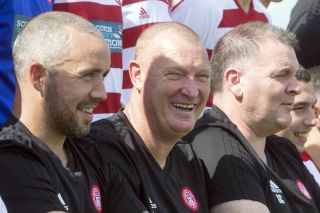 Hamilton boss Brian Rice admitted his side’s first win in six games would serve as a morale booster but insisted he had not been overly concerned about their recent form.

In that period, however, they have also drawn at Hearts and St Mirren and lost only narrowly to Celtic.

“It’s very difficult against Livingston, it always is. They’re always very well drilled. They’re a good strong team so that’s a massive win for us.

“People are saying it’s just one win in six but there aren’t many defeats in there. We’ve won [on Saturday], we’ve gone to Tynecastle and drawn and gone to Paisley and drawn, and Celtic only beat us 1-0.

“But psychologically it’s good to get a win again. It’s a real morale booster for me and the players. ”

He continued: “Last year we wouldn’t have won that game if we had fallen behind to Livingston early on.

“Overall – although I don’t look it as that’s my personality – I’m absolutely delighted.

“We stood up to them. We went a goal behind to a typical Livingston goal, which was well played by them.  We knew it was coming but we couldn’t do anything about it. It was a fantastic ball and a great header.

“But we hung in there and the fighting spirit with 11 men this week was great.”

Gary Holt, meanwhile, felt too many players did not take the chance to prove they deserve to be regular starters in his team.

The Livingston boss made four changes from the side that had played against Rangers in midweek but was let down by the performance.

“We tried to change it from Wednesday because there was a bit of tiredness in the team as the game wore on,” he said. “You give people an opportunity and you hope that they will take it.

“But I don’t think enough took it. Enough didn’t say to me ‘I want to be playing’.

“At the end of the day if we’re playing Saturday, Wednesday and then Saturday again you have to sometimes make changes to freshen it up.

“But sometimes maybe I just have to say no and tell the players they don’t deserve that opportunity. That’s on my shoulders and I’ll take responsibility for that.”