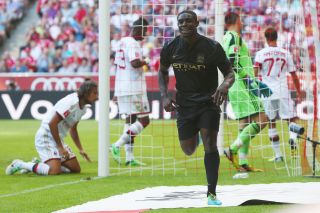 Richards is yet to play in the Premier League this season due to knee and hamstring issues, and has been the subject of reports linking him with a move away from the Etihad Stadium.

The 25-year-old has made two appearances for City - in the UEFA Champions League and League Cup - this season and has vowed to force his way back into Manuel Pellegrini's first-team plans.

"I did say at the start of the season I wanted to see the manager's plans and I'm in his plans, as he's said all along, so we'll see what the future holds, but I'm happy at Manchester City," Richards told BT Sport.

"I've been here since I was 14, it's a club I love. Before I got my injuries, I was number one choice. It's only because I got injuries and Pablo Zabaleta has done so well, I find myself not playing as regular.

"I'm fully fit now and I'm ready to show everyone what I can do."

While Richards looks set to remain at the club, two City players left the club on Thursday.