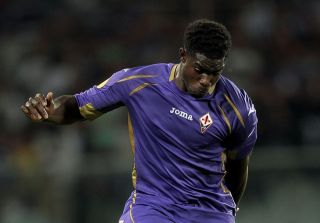 The 26-year-old, who is on a season-long loan from Manchester City, was replaced shortly before half-time in Wednesday's UEFA Europa League clash in Borisov, which Fiorentina won 3-0.

Fiorentina have yet to disclose how much action the England international will miss, although reports suggest he will be absent for at least three weeks.

"During [the] Europa League match, Micah Richards reported discomfort in the flexor tendons of his right thigh," read a statement on the club's official website.

"The injury forced him out of the clash before half-time. He will undergo tests tomorrow."

Richards has made four appearances for Vincenzo Montella's side since joining at the start of September.

Fiorentina occupy 10th spot in Serie A having taken six points from their opening five matches.